A chat about accessibility leads to major campaign 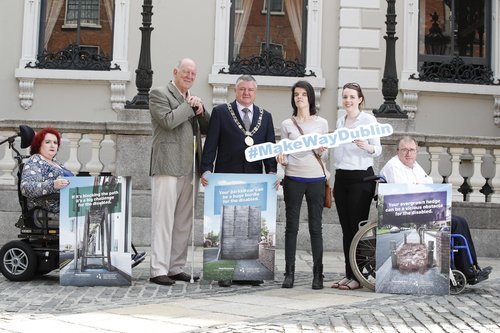 One day our CEO, Sen. John Dolan bumped into Dublin’s Lord Mayor for 2016, Cllr. Brendan Carr. They got to chatting.

How hard could it be to make Dublin more accessible, asked John?

Couldn’t be that hard, replied the Lord Mayor. As a Councillor he had been canvassed on the issue by disability groups in his constituency.

Disability takes many forms said the CEO and you really have to consult a wide range of people.

We’ll do it, said the city’s first citizen.

I’ll host it myself in the Mansion House and we’ll get those that design the city to work on improvements with people with disability.

And so it was that on 27 January, this year, over 80 people attended the first Mansion House workshop hosted by Cllr. Carr and organised by DFI. The city’s architects, engineers and planners turned out. They heard the day-to-day access difficulties that often result in people with disabilities just giving up on going out.

As if to illustrate, the area around the Mansion House on Dawson Street proved an obstacle course for the most able bodied due to LUAS works. There were diversions, disruption, dirt and noise. The Mansion House itself isn’t fully wheelchair accessible.

The Lord Mayor could only apologise but warned the capacity crowd that the day was about getting down to work and delivering some workable solutions. And that’s just what happened. The Council’s officials went off to breathe life into many of the recommendations. So when the working group got together for the follow up session on April 19, three main action items were announced.