Three Big Action Items out of Accessibility Session with DCC 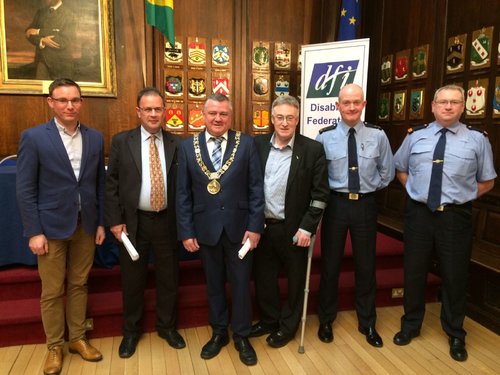 Part two of the DFI/Dublin Lord Mayor’s accessibility sessions for people with disabilities proved to be a day of action with three significant outcomes:

The Lord Mayor invited members of the disability community to email lordmayor@dublincity.ie with suggestions for matters to be included in the upcoming public awareness raising campaign. "It's your campaign, you tell us what you want to tell the People of Dublin," he said. The first of our sessions in January discovered a simple lack of wider public awareness is responsible for many obstacles so this campaign will be designed to address that.

Sgt. Peter Woods of An Garda Siochana told the session how a chance encounter with a disabled driver at a petrol station lead to his awareness of abuses of disabled parking spaces and permits. The result was the huge success of “Operation Enable”. Sgt. Casey said the 16 prosecutions arising showed that close family were usually the worse abusers of the disabled parking permit scheme.

Bicycles versus people with disabilities turned out to be a big theme for the Deputy City Architect when he took questions from the floor. One partially sighted person told him he had been hit by a bike five times – four out of these times he was on the footpath. In this context the session expressed major concerns about plans to put a cycle route through the soon-to-be pedestrianised College Green.

The contribution from Roger Flood from Dublin Bus provoked some of the most heated discussion. The problem of wheelchair users not being able to use the bus due to the disabled spot being occupied by buggies limits the mobility of many people with disabilities. The session heard that without legislation this thorny issue cannot be finally resolved. The Lord Mayor offered to meet with Dublin Bus in solidarity.

Closing the session, our CEO, Sen. John Dolan said this and all the Lord Mayor’s support was greatly appreciated. He hoped the next Lord Mayor would continue Cllr. Carr’s good work. Differing views were expressed and taken on board and it was up to all involved now to keep the momentum going.