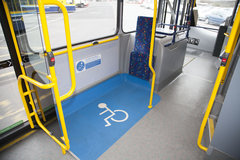 Almost 50% of people living with a physical disability have difficulty going out.[1]

Once Ireland ratifies the UN CRPD, private transport companies will have to take into account all aspects of accessibility.[2]

1 in 4 people with a disability do not use public transportation because they don’t find it accessible.[5]

Most rail and bus providers require 24-hours notice if wheelchair users plan to use their service. Lifts frequently out of order, coupled with staff shortages, results in people with disabilities avoiding public transport rather than trying to cope with the numerous difficulties they have to encounter.[10]