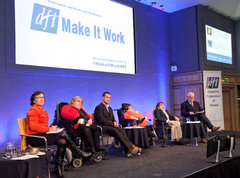 31% of working age people with a disability were at work compared to 71% of those without a disability.[1]

People with disabilities are twice as likely to be outside the labour force as the general population.[2]

Too many workers leave the labour market permanently due to health problems or disability, and too few people with reduced work capacity manage to remain in employment.[3]

Currently there are over a quarter of a million people with disabilities receiving a social welfare illness or disability weekly payment in Ireland. Almost half of these are receiving Disability Allowance.[4]

People with disabilities leave education earlier and are less likely to have completed primary, secondary, and third-level education than their peers.[5]

Workplace Grants and Employment Schemes for People with Disabilities

People with disabilities would like to take up work but are often afraid because of the loss of benefits such as medical cards or transport supports.[6]

43% of people on Disability Allowance would like to work, given the right supports.[7]

Employment Strategy for People with Disabilities