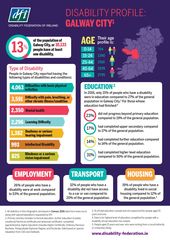 13% of the population of Galway City, or 10,133 people have at least one disability.

People in Galway City reported having the following types of disabilities and conditions:

In 2016, only 21% of people who have a disability were in education compared to 27% of the general population in Galway City.[3] For those whose education had finished[4]:

[1] All statistics in this infographic are based on data from www.cso.ie, along with special tabulations requested by DFI.