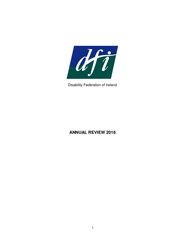 It was a year like no other for DFI – a ground breaking general election campaign ‘Disable Inequality’ then getting a disability inclusion candidate elected to the Seanad and the great loss of two powerful and greatly respected disability advocates – Mike Corbett and Martin Naughton. A loss compounded by them being our colleagues in DFI. The year ended as we agreed a Strategic Plan for the next four years.

The Seanad election saw DFI lead and then support ten organisations to collectively work together on agreeing our shared candidate selection through an open and democratic process. Eight leading disability organisations were central to this along with two other civil society nominating bodies. John Dolan, CEO of DFI, put himself forward as a candidate along with 34 others, DFI supported him in this decision, appreciating the many synergies between DFI’s work and the work he planned to do in the Senate. It was a great boost for the disability movement when John was elected in April, as it ensures that people with disabilities are being strongly represented in our national parliament.