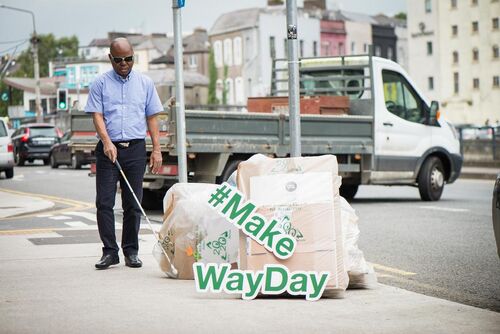 Press Release from the Disability Federation of Ireland

Make Way Day (MWD) is coming to a street where you live tomorrow, Friday 30 September 2022. Make Way Day is an annual campaign to make way on our streets for people with disabilities and to raise public awareness about the problems caused by obstacles blocking footpaths.

Commenting on Make Way Day, Pierce Richardson, Coordinator of the campaign, said, “Disability groups and organisations will be using Make Way Day this year to once again highlight obstacles such as:

“We believe that a genuine lack of awareness is behind most instances like these.”

Pierce continued, “The Disability Federation of Ireland have developed an online tool that campaigners can use to test and rate their local area along with using the MWD stickers to highlight the issues faces by people.  It is easy to use and download to a phone and will be circulated widely on the campaign’s social media platforms.

“Tomorrow offers an opportunity for people with disabilities to survey their area for obstacles and rate its accessibility and to share their frustrations by posting photos of obstacles to social media platforms using the hashtag #MakeWayDay22.”

Pierce concluded, “Over the past two years we’ve all become very familiar with our neighbourhoods. Now that the 5k restrictions have lifted we ask how much freer are people with disabilities to move about?”