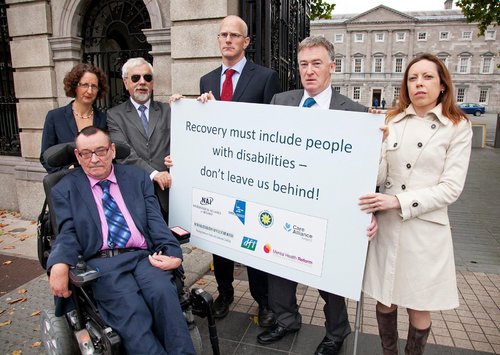 Statement issued to media by eight national voluntary disability organisations in Buswells Hotel at 10.30am on Monday 30th September 2013 We the under-signed national voluntary disability organisations, representing the diversity of people and families with disabilities and conditions which are disabling, including mental health, make this joint statement to Government regarding Budget 2014.

In 2011, the government promised that they would “ensure that the quality of life of people with disabilities is enhanced.” They also made a commitment to “forging a new Ireland that is built on fairness and equal citizenship.” Despite these assurances, disability and mental health services have been hit hard by six consecutive budgets. The further ‘chipping away’ at both disability specific and mainstream supports over the past year constitutes a double hit and represents a complete lack of understanding of the challenges faced by people and families with disabilities and mental health issues trying to live an ordinary life with health and well-being.

Budget 2014 will provide us with a clear expression of government priorities. In recent budgets, the Governments focus has been largely economic. We are seeing the economic take precedence over the social. The two realms have become disconnected in practice yet remain firmly linked in reality. This is evident in the inconsistent approach of supporting austerity measures, while at the same time ‘aspiring’ to be socially inclusive. Government continues to support policy objectives promoting community living for people with disabilities while at the same time implementing cuts that undermine community based approaches to services and supports for people with disabilities.

We need to strategically plan for social inclusion and this planning should be demonstrated in Budget 2014. Furthermore, innovative, quality services and supports should not be targeted in this budget. Human rights and social inclusion should not become the collateral damage of this recession.

We are seeking a rebalancing of the recovery programme and the protection of, and investment in, people with disabilities and conditions which are disabling. Budget 2014 must be driven not only by fiscal considerations but by the adjacent pursuit of sustainable social outcomes.

Action by the Government is urgently needed to: