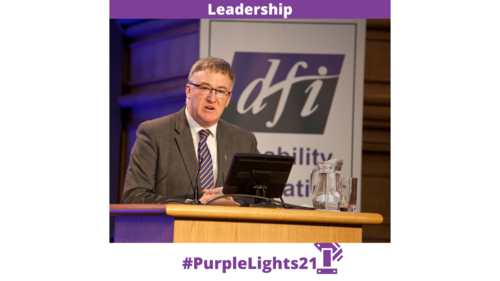 Every organisation and community has them. Those that step up, the leaders. Just as important are those that participate - as part of disability groups in companies and communities all over Ireland or as inclusion or access officers.

We want a big purple spotlight on these people this December 3rd, UN Day for Persons with Disabilities, IDPWD. Because this year’s theme is;

“Leadership and participation of persons with disabilities toward an inclusive, accessible and sustainable post-COVID-19 world.”

Four years ago, Gary noted there wasn’t much celebrating of IDPWD. Having survived a vicious attack that left him with an acquired brain injury in 2009, Gary felt there was much to celebrate about surviving, adapting, and living with a disability.

“I saw all these places lit up for St. Patrick’s Day cause we love our country and then lit up for Gay Pride cause we support gay people so I wondered why there was no acknowledgment of people with disabilities on our special day.”

He literally began knocking on doors. He invited himself into the public lobbies of major buildings and asking they “show some love and support” by turning purple on December 3rd. The Disability Federation of Ireland, DFI, were delighted to follow up on his efforts and support him.

Now the day is celebrated in Ireland with purple lights illuminating major landmarks and buildings throughout the country.  As Purple Lights organisers, DFI have a social media pack for our members and supporters. It has social media frames that can be used around your own photos of leaders in your organisation or those who take part and make a difference.

To demonstrate we’ve put our own CEO, John Dolan the frame! He’s been leading the fight for equality for people with disabilities for many years and in many fora including Seanad Eireann.

"The resilience of people with disabilities in this country is worth saluting and celebrating,” said John. “Especially as we emerge from the  pandemic that has had special edge for this community”.