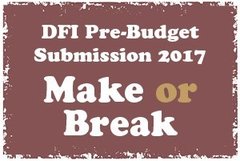 Disability is all around us

Every family is affected at some point and when they are, they are met with totally inadequate social services and supports. That is why DFI fought and won commitments to improve the lives of those with disabilities in election 2016. Budget 2017 is make or break time for these good intentions.

Ireland is now the last country in Europe to ratify the UN Convention on the Rights of Persons with Disabilities (UN CRPD). Budget 2017 must provide the necessary funding to implement the UN CRPD and bring to an end the long wait for real equality in Irish society.

If this Government is serious about the implementation of the UN CRPD, Budget 2017 must address the shortfall in financial support for services that people with disabilities depend upon, including:

Services were decimated during the recession. There is now a pressing demographic and societal need to restore and then expand these services.

During the 2016 General Election, the disability movement mounted a vocal and vibrant campaign to ensure that disability receives the political leadership, attention and commitment needed to make Ireland a truly modern, truly equal Republic.

Our Demands are in three key areas:

A properly resourced primary and community care infrastructure is required to provide for people with disabilities’ needs and to respond to growing demand. The cumulative impact of successive austerity budgets, along with the gross under-resourcing of critical health services has resulted in increasing delays in treatment and growing numbers of people on waiting lists.

Neurology services in Ireland are struggling to cope with current demand. A sustained programme of investment is required to ensure that the services meet even the minimum standards. These services, along with suitable housing, are vital in keeping people living in the community.

Inadequate housing remains a concern for many people with disabilities living in the community. Despite an ageing population and the growing numbers of people with disabilities, funding for the Housing Adaptation Grant Scheme was cut by a staggering 56% from 2010 to 2014. Longer waiting lists for the Scheme and people living in intolerable conditions have been reported. With ‘recovery taking hold’ this funding needs to be restored. Almost 4,000 people with disabilities are on social housing waiting lists. Ireland still has almost 3,000 people living in congregated settings and many others inappropriately placed in nursing homes. They are deprived of the basic human right to live in the community with choices that are equal to others. Even if the current target of moving 180 people per year were met, it would take another 15 years to de-congregate everyone. This is totally unacceptable and the Government must now address this situation.

In Budget 2017, this Government must ensure that all people with disabilities have an adequate income that supports them to live with dignity. As an initial measure, DFI is calling for an increase of €20 to disability payments to offset some of the additional costs of disability, as well as the protection of all supplementary benefits. Eligibility and supports for all employment activation schemes must be inclusive of people with disabilities, regardless of the social welfare payment they are receiving. Measures must be put in place to ‘make work pay’ for people with disabilities, including a Disability Tax Credit and medical card based on need.

“We need more resources for disability as disability services have taken a hit in the past seven or eight years. The Government and I will do our best to deliver on that.”

Adequate housing and services to support living in the community:

Disability Must Be a Priority in Budget 2017

Disability can happen to any one of us, at any time. In 2017, over 56,000 people will be diagnosed with a disability for the first time.

The budget for disability services was reduced by €159.4 million, or 9.4%, between 2008 and 2015. Cuts on this scale have had a severely negative impact on the quality of life of people with disabilities.

The recession pushed people with disabilities out onto the margins of Irish society. A fair, focused and efficient use of public money can bring these people into the circle of opportunity.

Our economy is out of crisis and it is now growing strongly. The ESRI’s Initial forecasts for 2017 indicate that Ireland’s GDP will grow by 4.2%. [ESRI, Quarterly Economic Commentary, Summer 2016, 21 June 2016.]

A senior Government Minister has confirmed by the end of 2017 the country will “not be borrowing a cent.” [Comments by Richard Bruton TD, Irish Examiner, 5 February 2016.]